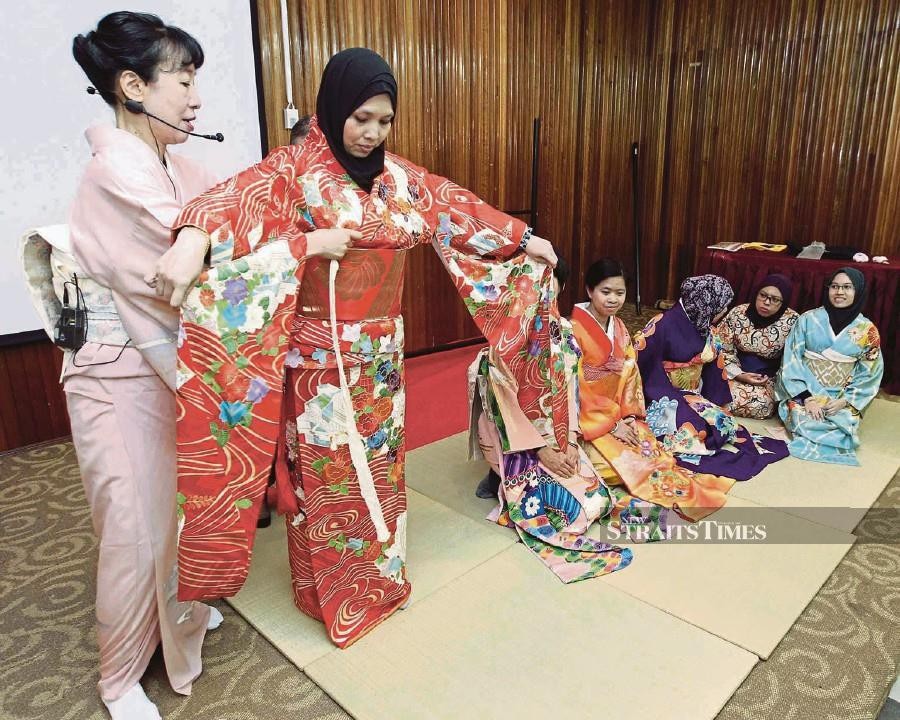 Teacher: Konnichiwa. Minna genki? (Good afternoon. How are you all?)

THE conversation above may seem typical between a teacher and a student in a classroom in Japan. In fact, it is a real-life scene in a Japanese proficiency class at one of the higher education institutions in Malaysia.

Many universities have offered international language courses such as Japanese either as a graduation requirement or credited electives for some time now.

The Malaysia Education Blueprint 2015-2025 (Higher Education) encourages students in higher education to learn one global language apart from being proficient in Bahasa Malaysia and English.

Having the skill to communicate in a third language or an international language makes graduates more in demand in the global marketplace, opening doors to building rapport in the international business world as well as enabling the learning of new knowledge that will help them in their careers and life in general.

At Universiti Teknologi Mara (UiTM), learning a third language is a requirement of bachelor’s degree programme students. The university senate has set the third language as a general course students enrol in for three semesters with six credit hours.

UiTM Academy of Language Studies dean Associate Professor Dr Ahmad Mazli Muhammad said UiTM’s mission is to enhance the knowledge and expertise of its graduates in all fields. Proficiency in a third language adds value to employability.

“Employers seek this valuable asset in potential employees, as they are able to connect with stakeholders and prospective customers. In this age of multinational entrepreneurship, companies are in search of new markets, therefore hiring multilingual employees is a great step in the direction,” he added.

Associate Professor Dr Jariah Mohd Jan, dean at UM’s Faculty of Languages and Linguistics, said: “The exit language requirement for students in international language degree programmes is a minimum of B2 at the Common European Framework of Reference for Languages level. Upon graduation, students are expected to interact with a certain degree of fluency and spontaneity, and we want to make sure that they leave with sufficient language competency trusted by top employers.

“Learning international languages benefits students especially in the current globalised world where mobility is facilitated. It can increase graduate employability as students are able to compete both at the national and international job markets.

“And, of course, learning a language means learning the home language culture as well.”

“It is compulsory to pass the enrichment paper as credit will be counted for graduation. However, the audit subject will be recorded in the academic transcript only if students pass the paper,” he added.

At Universiti Putra Malaysia (UPM), global languages are offered at its Centre for the Advancement of Language Competence (CALC) as electives.

“Global languages help them be more responsive to cultural differences. The majority of bachelor’s programmes at UPM only require students to pursue one level of a global language proficiency course. However, there are programmes which require students to take up to Level Two of the language. Students who pursue Level Three do so out of interest in the language,” he added.

Students pursuing language programmes at UM can choose to major in one of six international languages: French, Italian, Spanish, German, Japanese and Arabic.

“We also have Thai, Korean, Japanese and Burmese as a compulsory course for students of East Asian Studies and South East Asian Studies at the Faculty of Arts and Social Sciences. European languages such as Russian and Portuguese are also open to all students from other faculties and can be taken as electives,” said Jariah.

“UM tries to ensure that major international languages are offered to students primarily to be in line with current national policies which favour internationalisation. The choices available are also a reflection of the aim of UM to be inclusive in terms of international foreign languages taught.”

The languages are major international languages and reflect rich cultural diversity. Spanish for instance is the official language of 21 countries, and comes in third place worldwide after Mandarin and English. Also among the Internet community, Spanish is the third most utilised language.

“German is offered because Germany is ranked number five in terms of annual publication of new books. Knowledge of German offers students extended access to information. A wide range of important websites are in German.”

“Arabic is one of the most popular third language among students due to two reasons: not only because a number of UiTM students already have proficiency in Arabic, but also because they are aware that Arabic is spoken by millions of speakers worldwide, and is the official language of 28 countries with growing economies in the Middle East and Africa,” said Ahmad Mazli.

“As for Mandarin, the students choose it because they see the enormous economic shift that China has gone through in the past few decades, into international trade ties and cross-border treaties to huge leaps in the field of science and technology, not only in Malaysia but also globally.”

“Students may choose Arabic to understand the Quran, Mandarin because it is widely spoken in Malaysia, Japanese due to pop culture (anime, J-pop, etc.) and French for travels,” she said.

“The German language is a popular elective among engineering and science students as many hope to further their studies in Germany. It is also popular among music degree programme students as many scores are written in German, hence assisting them to further understand and appreciate the music.”

In Universiti Kebangsaan Malaysia (UKM), the Korean language is ranked one of the top international languages electives among students.

Professor Ryu Seung Wan, director of UKM’s King Sejong Institute, disagreed with the view that the Korean language gained prominence because of K-pop or K-wave.

“According to my research in 2005, students’ motivations to take up Korean as a foreign language subject were firstly, personal interest; secondly, to further postgraduate studies in Korea; and thirdly, get a job in Korean companies.”

Learning a language is not just learning to read, write, speak and listen in the language. It is also about practice and exposure.

Ryu tries his best to teach every student to master not only the Korean language but also increase knowledge of Korea such as its culture and history.

“UKM has been working closely with the Korean government and universities as well as private sectors and Korean companies for students to experience Korean culture as well as activities such as Korean speech contests, seminars and international forums for Malaysians,” he said.

UPSI tries to motivate students by going beyond the typical classroom learning setting.

“They have to carry out many activities such as field work, interview foreigners, hold Skype meetings with students in other countries as well as join international students exchange programmes.

“Students volunteer as facilitators and liaison personnel to assist foreign students and visitors from overseas. They also participate in activities organised by foreign embassies and institutes,” said Mohd Sahandri.

UPM emphasises mobility programmes to get students immersed in the cultures of the global languages taught.

This year there are plans to organise mobility programmes to Spain and Myanmar.

“Through the mobility programmes, we were able to observe our students’ ability in communicating in the target language when carrying out daily activities. The students were more confident in speaking the language with local people, even with limited vocabulary and language structure,” said Farah Nurzakiah.

Students who have undergone or are enrolled in international language courses gain many benefits.

Rafaad Roslan, 26, who recently graduated with a Bachelor in English Language degree from UPM, is now employed at Japan Foundation Kuala Lumpur due to the Japanese language course he took during his undergraduate years.

“I took Japanese as an elective at university and I attended Japanese classes for a year, went to Japan for a year (Kokugakuin Short Term Exchange Programme in 2014) and returned to finish another semester of Japanese while learning Thai and Persian at the same time,” he said.

“Fluency in speaking, writing, reading and listening in Japanese are among the prerequisites at my workplace because most work-related matters are in the language.

“Learning international languages is beneficial to getting a job. But I also learnt Japanese etiquette which boosted my employability.

“Learning a foreign language not only involves the linguistic properties, but also culture, taboos and behaviours of the people of the target language,” he added.

Aishah Mohamad, 24, a Bachelor of Languages and Linguistics (Spanish Language) student at UM, also finds that learning a foreign language extends to learning the culture of that language.

“After almost four years studying Spanish, I am now able to speak, listen, read and write in the language. My confidence in speaking Spanish is boosted after joining an exchange programme funded by the Colombian government to learn Spanish in Colombia for five months,” she said.

Aishah is hopeful being proficient in Spanish will open doors for her.

“Nowadays, many candidates compete over one job. Knowledge of an extra language, not only helps you to shine in the labour market, but also helps to expand knowledge of different cultures. It increases your chance to further studies abroad.

“You can interact with native speakers and immerse yourself in their culture. You learn new things every day and you will be more creative and tolerant. These are essential to a career and will also help to make you a better person,” she said.

Ariesya Abdullah Sani, 21, a Bachelor of Applied Language Studies (Honours) English for Professional Communications student at UiTM, learns French out of interest as well as the fact that it will help her in the future.

She has acquaintances and friends who work in international companies due to their proficiency in French to vouch for the benefits of learning the language.

“I do find the course interesting. Lecturers not only teach grammar and sentence structure etc., but they also mention songs and current issues in the native country.”

“Being multilingual obviously means ease in communication. We may be separated by oceans and borders but our willingness to learn about others connects us.”

“Originally, I attended Korean language class in the second year of my bachelor’s degree course because of its beauty. The knowledge came in handy on multiple academic trips and attachment in South Korea. From reading road signs to conversing with locals, everything is easier. The Koreans are appreciative of attempts in communicating in their language,” she said.

“I am happy to be a science student with equal interest in learning a foreign language. It is very satisfying to be able to understand the grammar and nuances of a language.”

Credit: Article was written by Rozani Sani and published in the New Straits Times on the 1st of May 2019

Learn a language and interact with the culture that speaks it